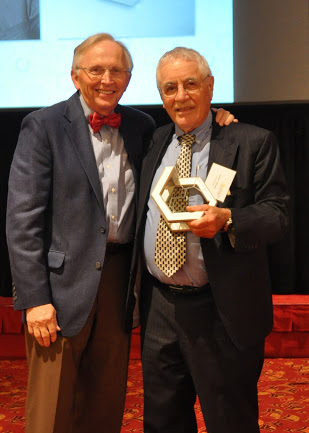 Hector is former chairman of the University’s Biochemistry Department. He is well known for his discovery of the vitamin D-basedendocrine system and the development of 8 pharmaceuticals used worldwide.
He was elected to the United States National Academy of Sciences in 1979. Hector has trained almost 160 graduate students and has more than 700 patents to his name. In addition, DeLuca is president and CEO of Deltanoid Pharmaceuticals, a biotechnology company founded on technology he developed, and has been responsible for the development of Bone Care, Int. (acquired by Genzyme) and Tetrionics (now Sigma Aldrich Fine Chemicals acquired by Merck).

Hector has received many national and international awards, including the Gairdner Award of Canada, the Roussel Prize of France, the 3M Life Sciences Award of the Federation of American Societies for Experimental Biology, the Rank Award from London and he holds three honorary doctorate degrees.