Nearly every headline written about the current flu season points to high levels of hospitalizations and deaths expected this season—and statistics back them up. We were warned about this season’s severity when the flu vaccine was only 14% effective in Australia1. A recent study showed vaccine effectiveness of only 10% in Canada for adults ages 20-642. An early spike in US flu cases has also put a spotlight on this year’s intense flu season. 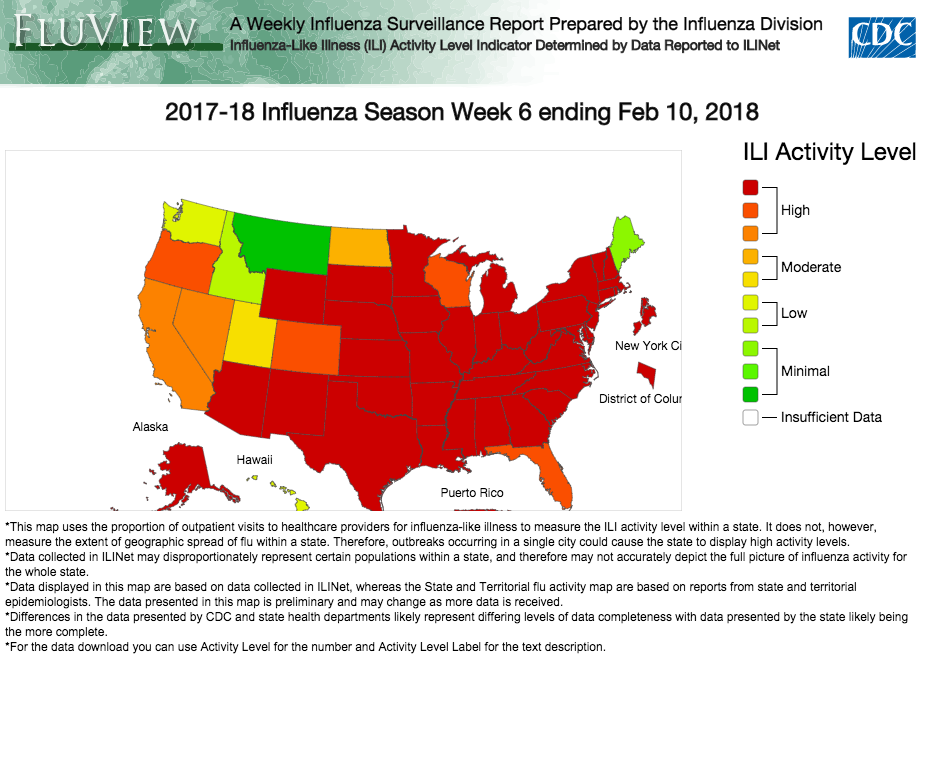 Prevalence of Influenza-Like Illness (ILI) across the United States in February 20183.

How do flu vaccines work?

Influenza viruses cause the flu—you know: high fever, runny nose, sore throat, coughing, headaches and muscle aches. The viruses infect your nose, throat, and lungs3. Your best shot at preventing the flu is washing your hands often and getting a flu vaccine. When you get the flu shot, you expose your body to a mix of dead influenza viruses. Around two weeks later, your body develops antibodies against the viruses in the vaccine3. These antibodies stay in your body and give your immune system a boost when you encounter influenza later on.

Why is the flu vaccine less effective some seasons?

As with any treatment, the vaccine is not as simple as it seems. The flu vaccine doesn’t always protect against the flu. There are a few simple reasons for much of the lack of protection; first, the standard flu shot largely relies on production of antibodies to kill the virus. In comparison, more effective vaccines stimulate multiple branches of the immune system.

Live flu viruses are more effective in producing immunity than current dead flu virus vaccines. The immunity gained from a bout with the flu can last much longer. In fact, in 2008 survivors of the 1918 flu pandemic (elderly people who were exposed to the virus nearly 90 years before) were tested for antibodies against the pandemic flu strain. Each individual had antibodies in their blood that were still protective against the 1918 flu strain.4

The second reason is that production of the vaccine relies on prediction. The vaccine is produced in eggs, a process that requires five to six months of labor.  Scientists pore over clinical data to find the most common flu strains of that year and design vaccines to combat the predicted virus; all of this must be accomplished early enough to produce the vaccine before the flu season begins, but simultaneously allows time for the circulating virus to change. Current vaccines do protect from the flu, but their effectiveness relies on accurate predictions of the coming flu virus. In the past, we’ve seen that it’s hard to produce a vaccine that is consistent in its flu prevention. Over the last 13 seasons, the efficacy of flu vaccines in the US has ranged from 60% to 10% (see graph3).

Of course, a true influenza infection also comes with an array of unpleasant symptoms, and you only gain immunity against the exact strain you were infected with. Ideally, a person would be able to reap the benefits of consistent immunity without the risks of contracting the flu.

FluGen asks, “Can we do better?”

In the midst of a rampant flu season, a universal flu vaccine sounds better than ever. FluGen, based in Madison, WI is working to offer a unique solution.  Based on a discovery at the University of Wisconsin-Madison by Dr. Yoshihiro Kawaoka and Gabriele Neumann, FluGen has developed RedeeFlu™, a live flu virus that can only replicate once in the body.

“RedeeFlu™ is a live virus with a gene taken out,” explained FluGen’s founder Paul Radspinner. “It goes into your body through your nose, the typical route of infection, and goes through a single round of replication.” In contrast to the standard flu shot, “this vaccine activates most of your body’s immune responses.” Since both antibodies as well as white blood cells are activated, the body’s immune response to RedeeFlu™ mimics the response evoked by a true flu infection, decreasing your odds of contracting the flu. The production process of RedeeFlu™ is faster—based in mammalian cells rather than eggs, allowing less time for the virus to change before the vaccine is available.

FluGen has completed a phase 1a trial of RedeeFlu™ and is looking to complete more trials in 2018. This summer, FluGen will probe how well the very young and very old respond to RedeeFlu™. FluGen will also investigate how well RedeeFlu™ protects against a mismatched flu strain. In this study, the vaccine will be purposely mismatched by 6 years (a 2008 vaccine vs. a 2014 flu strain). If the results follow what FluGen has seen in pre-clinical studies, “it will be the first time protection has ever been shown in a vaccine and virus that are so far apart,” explained Radspinner.

Hospitalizations of people 65+ years old have already almost doubled from last season, and the numbers are still increasing. While we eagerly await a universal vaccine, Radspinner stands by the CDC’s recommendation that everyone get the standard vaccine. “The current vaccines aren’t perfect, but they’re better than nothing.” He explained that the flu shot may not always prevent the flu, but that there’s a lot of data showing the flu shot’s ability to lessen the severity of an infection.

In his parting advice, Radspinner echoed the wisdom of mothers everywhere: “Wash your hands every chance you get.”

You can follow the updates on RedeeFlu™ here. For more Wisconsin biohealth news, subscribe to BioForward’s newsletter here.