The Best Cities for Women in Tech in 2018 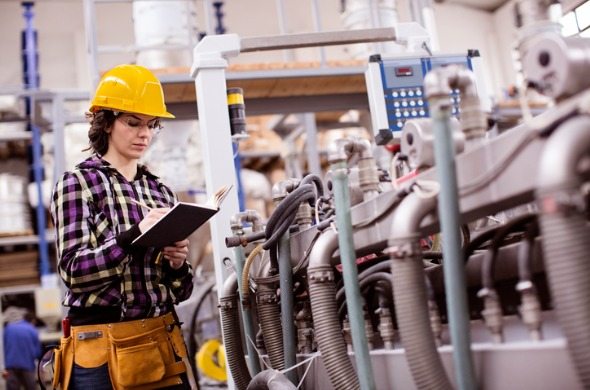 Women are consistently paid less than men for the same work, according to data from a variety of sources, including the Bureau of Labor Statistics and the Census Bureau. Additionally, women are often underrepresented in the highest-paying occupations. In particular, women are underrepresented in STEM occupations, which in today’s economy tend to come with the best pay and strong long-term prospects.

In order to rank the best cities for women in tech, SmartAsset looked at data on four factors. We looked at the gender pay gap, income after housing costs, women’s representation in the workforce and percent growth in employment. Check out our data and methodology below to see where we got our data and how we put it together.

This is SmartAsset’s fourth annual study on the best cities for women in tech. Check out the 2017 version here. 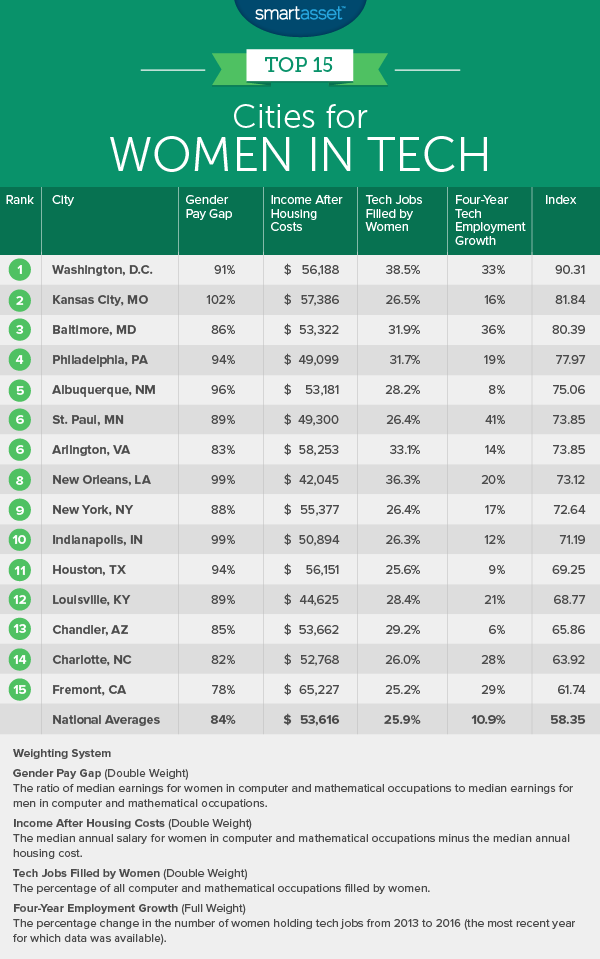 Once again, Kansas City comes in second, hot on the heels of Washington, D.C. The tech scene is slightly less dynamic in Kansas City than it is in D.C. From 2013 to 2016, the number of tech jobs grew by 16%.

However, Kansas City ranks well due to the high pay women in tech earn compared to their male colleagues. In fact, women in tech occupations earn 2% more than men in tech do, on average.

Baltimore occupies the third spot. This is a great city for women in tech who value job security. According to the Census Bureau, the tech scene in Baltimore is flourishing. From 2013 to 2016, this city saw the number of tech jobs grow by 36%. That is the second-highest percent increase in tech jobs in our study.

Women also occupy a large chunk of these jobs. Overall 32% of tech jobs are filled by women, the fifth-most in our study.

However, despite being paid similarly to men, women working in tech here are not paid a lot by tech standards. After accounting for housing costs, the average Philadelphia woman working in tech takes home $49,100. That only ranks 27th in the study.

The downside to working in the tech space in Albuquerque, for both men and women, is the industry’s relatively slow growth. From 2013 – 2016 the number of tech jobs in Albuquerque grew by only 8%, a below-average rate.

No city in our study has a faster growing tech industry than St. Paul. According to our data, the number of tech jobs grew by 41% from 2013 to 2016.

Women are fairly well-represented in the tech industry. Women in St. Paul occupy 26.4% of total tech jobs and the average women earns 89% of what the average man earns.

Arlington is one of the best cities for pay in the tech industry. According to our data, women working in tech earn $58,253, on average, after accounting for housing costs. However, that pay figure is below what Arlington men who work in tech take home. The city has a tech gender pay gap of 83%.

While Arlington ranks seventh for women’s average income after housing costs, it ranks a dismal 31st for its gender pay gap. Women also make up 33% of all tech jobs in Arlington.

Unfortunately for women in the New Orleans tech world, that pay is somewhat lacking. After taking out housing costs, the average woman working in tech earns $42,000.

Despite the high cost of living in New York, especially the housing costs, women who work in tech still take home a good amount of money. According to our data, the average New York woman working in tech earns $55,377 after accounting for housing costs.

However it’s worth noting those women are paid about 12% less than men, on average, according to Census Bureau data.

Indianapolis rounds out our top 10. The tech industry here is relatively equitable. Women and men earn roughly the same amount. On average, women earn 99% of what their male counterparts do. Only second-ranked Kansas City has a better score for gender pay gap in our data set.

The tech industry also pays well in Indianapolis. After accounting for housing costs, the average woman in tech earn just under $51,000 per year. Certainly enough to get a head start on saving for retirement.

The average woman working in tech in Houston takes home $56,151 after paying for housing. Importantly, that figure is similar for men in tech. According to our data, Houston has a tech gender pay gap of 94%.

The reason Houston was unable to crack the top 10 is because of relatively slow growth in tech employment. From 2013 to 2016, the number of tech jobs grew by just 9%. For that metric Houston ranks 44th.

The most populated city in North Carolina takes the 14th spot. Women here make up 26% of tech workers and take home $52,768, on average, after accounting for housing costs. From 2013 to 2016 the number of tech jobs in Charlotte grew by 28%, or the sixth-fastest rate in our study.

There are plenty of high-paying tech jobs in Fremont. From 2013 to 2016, the number of tech jobs grew by 29%. And the average Fremont woman working in tech earns $65,200 per year, after accounting for housing costs. The city ranks third in that metric.

However, men largely dominate the tech scene in Fremont. Men occupy 74.8% of tech jobs in Fremont. Furthermore, while women in tech are well paid compared to the majority of cities on this list, men are much better paid: The city has a tech gender pay gap of 78%. These two scores kept Fremont from ranking any higher in this list.

To find the best cities for women in tech, SmartAsset looked at data for cities which have at least 200,000 residents. We took out any city from our data set which did not have statistically reliable data. This left us with a data set of 58 cities. We ranked them using the following four metrics:

Tips for Saving for Retirement

While women are paid less than men on average that doesn’t mean they have to be less prepared for retirement. Here are some tips to make sure no one falls behind on retirement planning

While those 401(k) figures may be daunting there are ways to work toward them. For starters, if your employer offers a 401(k) match program, you should make sure that you’re contributing enough to receive the full match. Otherwise, you’re essentially turning down free money. Different employers have different match contribution limits and rules so make sure to research the specifics of your employer’s program.

Another way to save for retirement is to invest in a individual retirement account (IRA). A traditional IRA can be a great tool for retirement because you can deduct your contribution to your IRA from your taxable income. In other words, you’re lowering your taxable income and decreasing your tax bite by contributing to an IRA. Keep in mind, with this type of account, you will have to pay taxes when you withdraw the funds in retirement. Another option is a Roth IRA. A Roth IRA allows you to pay taxes on your income today and withdraw it tax-free when you retire. This makes sense for people who think they will be in a higher tax bracket come retirement.

If you are looking for hep to get the most out of your savings, you might be thinking about a financial advisor. Finding the right financial advisor can help you reach your retirement goals. It’s important to consider factors like an advisor’s credentials and fee structure before working with them.